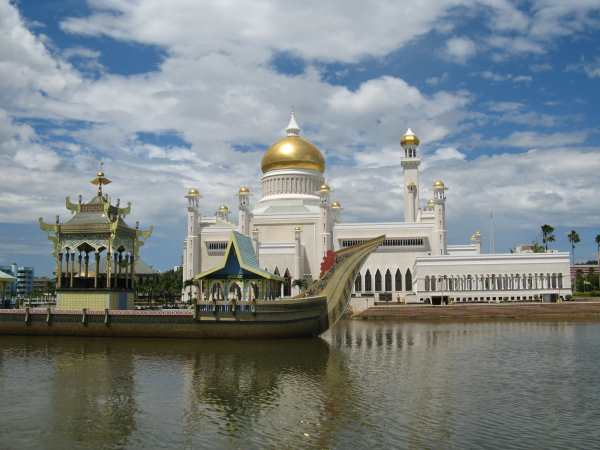 February 2011 I was travelling back to New Zealand from Cambodia on Royal Brunei Airlines and had a day’s transit in the capital, Bandar Seri Begawann. My parents had been there previously and said it was a pleasant place to pass a day. They recommended I go on a “long-boat” ride along the mangrove-lined waterways to see the famed Proboscis Monkeys.
My plane touched down in Brunei about 8 am. I was a bit unsure of myself which is typical of me when I arrive in a new destination and am travelling alone. First of all I had to get from the airport into town which is about a 20 minute journey. Being a budget traveller I was determined to catch the public bus which only cost about US$1 compared with a taxi that costs an exorbitant USD$25-35. I had been informed that the “purple ” public bus came every half an hour or so, but after waiting over 2 hours for one I was getting rather desperate and giving up hope. Unfortunately for me this particular day turned out to be Brunei’s National Day and, being a public holiday, the buses weren’t running regularly. Suddenly I saw a purple bus about to leave the airport parking lot. I ran 200-300 meters after it, shouting and waving my arms and fortunately got driver’s attention.
The bus dropped me off at the central bus station which is near the waterfront and the main tourist area. In most places around the world a public holiday typically means there are a lot of people about, but here the place seemed almost deserted. Again I was thinking this stop-over in Brunei was turning into one big disappointment. Hot and bothered I bought a cold drink and thought about my next move.
The main attraction near the waterfront is the white and golden jewel that is the Sultan Omar Ali Saifuddien Mosque. Mesmerised by its beauty I took photos from all angles before taking off my shoes, donning a black robe that was offered by a volunteer and entering inside. Signing the visitors’ book I noticed that the group of young people in front of me were visitors from Cambodia. Having just spent a month in Cambodia couldn’t help myself and had to introduce myself. They say “it is a small world” and it truly is. It turned out that one of the women in the group was a work colleague and friend of a Cambodian NGO friend of mine! My luck had changed and things were looking up 🙂 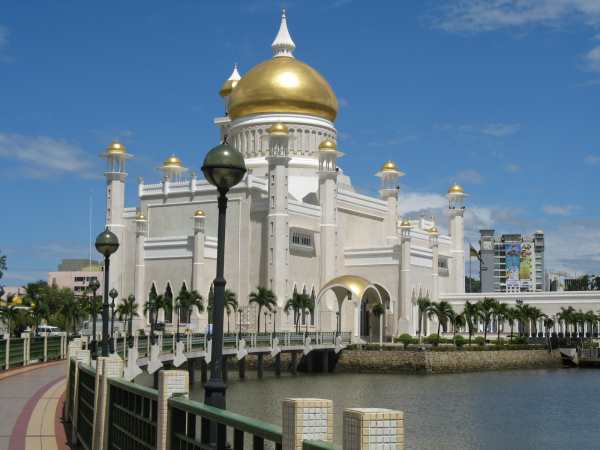 As I went to leave the pleasant young local man who had guided me through the mosque asked me if I would like to go on a long-boat ride on the river. It is an unfortunate by-product of my years of travelling that I have become rather cynical and distrustful of offers of help by local people. I assumed that he would rip me off and initially I said I would think about it, but intending to look elsewhere. Then I saw him negotiating the same boat ride deal with the Cambodians and I asked them if I could tag along with them and they kindly said yes. I had previously been told that the last public bus back to the airport (because of the public holiday) was at 4pm and my flight didn’t leave til 10:30 pm! The tour was going to end at about 4:30pm so I had a dilemma. If I went on the tour I’d have to fork out for an expensive taxi to the airport. It was then that the mosque guide-come-tour guide said his brother had a car and they would take me on the tour and then out to the airport for USD$25. I didn’t know these people and I was a woman travelling alone. I should have said “no” but I didn’t want to miss out on the boat trip so I said “yes”. I’m so glad I did because I had the most wonderful afternoon and evening to read more. 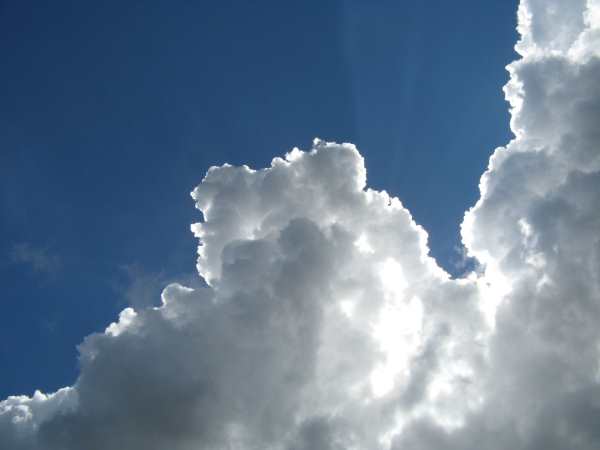